The store will not work correctly in the case when cookies are disabled.

We use cookies to make your experience better. To comply with the new e-Privacy directive, we need to ask for your consent to set the cookies. 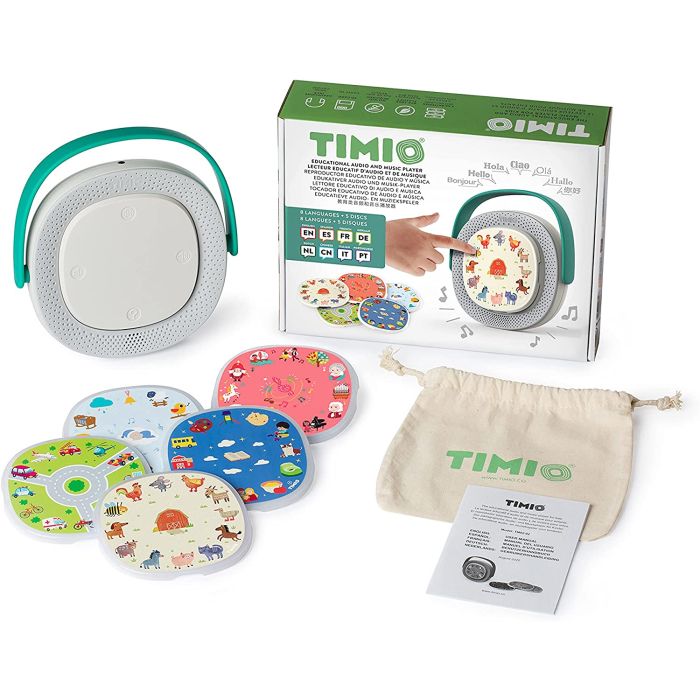 Skip to the beginning of the images gallery

TIMIO is a screen-free, interactive and educational audio player that grows with kids from infancy into grade school while developing their vocabularies and imaginations. Learn the alphabet, numbers, colours and shapes, listen to stories, music and sounds. All this in 8 languages!

TIMIO is interactive and easy to use

TIMIO works straight out of the box without internet or screen. Simply press the button to select a language. Then place a magnetic disc on TIMIO, tap an image and listen to sounds, words, music, stories and quizzes. TIMIOdesign is so simple that even the littlest hands can play with it independently.

With its ergonomic handle TIMIO becomes your childcompanion wherever he or she goes - even on long car, train or plane rides!

TIMIO helps your child grow and grows with your child

Your child develops in his or her unique way. The youngest will listen to sounds and images that turn into vocabulary. Placing the discs on TIMIO and tapping an image help develop their motoric skills. Older children answer quizzes, listen to stories to relax or music to make them move. And the oldest ones discover new languages to learn about diversity and cultural awareness.

What does the TIMIO Starter Set include?

The TIMIO starter set comes with the TIMIO player, 5 discs with audio content of approx. 90 minutes length (varies per language) and a storage bag for the discs.

There are 20 more engaging discs sold separately in 4 sets with 5 discs each.

All delivery times are stated in working days. Please note that in the case of delivery a working day is classed as any day other than weekends or public holidays.

Any purchase made upon a non-working day will only be processed upon the next available working day.

If you fail to take delivery of the ordered goods and they are returned to us, we will contact you upon their arrival via email. A refund of the cost of goods without shipping will be processed within 7 days unless you have notified us before then to advise that the goods are still required. If the goods are still required, you will be charged an additional shipping fee for a second delivery.

We understand that sometimes you will change your mind and that you might need to return an item, you can do so as long as your product is returned unused and in its original condition and packaging with proof of purchase, we will happily exchange or refund it for you.

Before you can make a return, you'll need to contact sales@kiddiewow.com to get a return label. Items should then be returned securely in their original packaging and within 14 days of obtaining return label. A refund will then be made after receipt and assessment of the item.

Conditions for refunds are: